Michael Jackson's death shook my insides. It was a shock to me despite knowing how unhealthy, mentally and psychologically, the man was.

Peeps stand, some sit. I approach the crowd, adjusting my green shirt on the way. A WOMAN passes by on her phone, and I can't help but listen --

Woman: "Michael Jackson was rushed to the hospital? No way."
I stop in my tracks. Oh, wait. Like Michael, Michael? Or, some other Michael Jackson I don't know because there's no way Jackson 5 Michael is on the brink of death...right?
Woman: "What the hell happened to him?"
I don't know what happened to this other Michael she's talking about but I'm walking away 'cause she's getting me worried. As I reach the picnic tables where all of the other extras are sitting, I immediately hear them discussing MJ. Now my heart is racing.
Man: "Yo, he's done. He's gone, yo. Michael Jackson is dead."
Whoa. Hold up. Okay. Wait. Dead?! How can a man, at 50, be dead. I stand there, shocked. Not knowing what to say or what to do except sit down with my sad thoughts. Michael is gone. 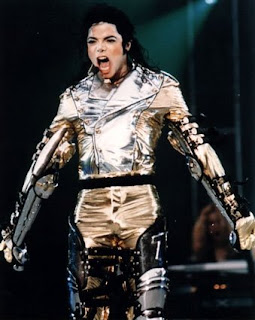 And, a day later, I am still sitting. A day later, I am still replaying classics over and over and over again. This man was an icon. He changed so many lives. Music would not be what it is today without him.
Late last night when I was alone in my car, "Beat It" came on. I lost it. And, it wasn't one of those crying fits that you feel coming. It was one of those that comes at you like a quick left hook. I suddenly realized that despite all of Michael's issues and mental problems, he gave so much to me. His music brought me joy, laughter, pride, and connection. I grew up admiring this man. "Remember the Time" used to be the music video I daydreamed to all of the time when I was younger. I wanted to date the Moonwalk. I wished I could dance and sing like Michael so many times with thousands of coins in hundreds of fountains.
I realized that most of us, rightfully so, have been hatin' on him for his looks and other problems. For the past ten years, I've forgotten this man's music and how much it brought to my life. Last night, I saw Michael Jackson for the first time in years...without judgment and harsh words.
I was a girl again who could appreciate a brilliant man's work.
Posted by Lauren Hamilton at 12:30:00 PM