Imagine this is your home. 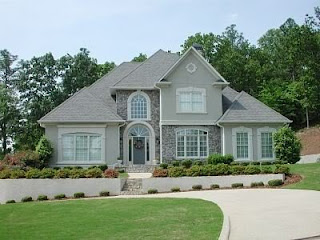 (photo found here)
It's cozy...
It's nice...
You love it.
Now imagine that you've lived here four years and recently found out that it used to be a meth lab.
Oh, snap.
I don't know what you'd do, but I'd put on some running shoes and jet the hell outta that casa faster than fast.
Like, so fast Lance Armstrong would wonder if he could ride me.
Yes, I'm sure this hasn't really ever happened to you, but it is currently happening to Rhonda and Jason Holt + their three kids. After the family suffered various illnesses (respiratory and kidney problems, migraines), they knew something was up. Sure enough, they found out several months ago that their house was used as a drug lab, and was contaminated with with methamphetamines, which had permeated the drywall, carpets, lungs, etc.
Yeah, that sucks. Hard.
On top of that bad news, they found out the cost to clean their home of the toxins -- $30,000.
Whack. And, I'm sure Rhonda and Jason would have passed on buying their home if they knew its history. Insert hypothetical conversation:
Jason: "I really like this house."
Rhonda: "Me, too, honey. It would be perfect for the kids."
Real Estate Agent: "Great! Oh, by the way, I forgot to mention this used to be a drug lab. Ya know, just stuff like meth and cocaine."
Rhonda: "Time to go."
Jason: "I'll get the door."
Yes, they would have been out of that house ASAP. Here's what Rhonda recently told the New York Times:
"We had no idea that we were starting a family in a meth house," Rhonda Holt told the Times. "We bought a house that eventually was going to sentence our family to death."
Sad story, but at least they got out before any serious damage on their health occurred. I think it's time to establish national standards on cleanup for meth contamination...right?
I'm just sayin'.
Posted by Lauren Hamilton at 9:13:00 AM