Okay. Look. I understand that we, at times, fall out of love with the person we're in a relationship with.

And hey, I even understand that we have moments when we say rude thangz about the other person...ones that we wish we could take back right after the words come out of our mouth.


It happens. All of the time.


But, I have a hard time forgiving Richard Jefferson(NBA player) for the way he broke up with his adorable fiancée, Kesha Ni'cole Nichols -- 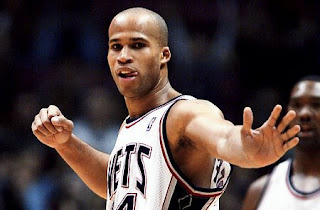 Yes, Jefferson spoke to The New York Post, admitting to breaking up with her by E-mail and offering a "six-figure settlement" to "help her move on."


Let me be real with you. I get that Jefferson just ain't that into her, but the way he "dumped" Kesha breaks my heart. And, it upsets me. Why would another human being treat another person in this way? I don't care if he prefers writing down words to avoid conflict. He owes her the respect to sit down face-to-face and express his feelings.


I have an issue with mean, selfish peeps. And boy, this isn't nice. I'd love to understand where he's coming from...ya know, what makes him think this is a cool thang to do? After all, they were in love at some point. They had a long lasting relationship. Doesn't that matter at all to him?


That's the straight up answer. And, women do this, too. Don't get it twisted. I've experienced this before and it makes you feel like, "damn, was this person ever really with me?" To be ignored or treated unkindly after being in a relationship shows you who that person really is at his or her core. So, I say to Kesha --

Be glad for that E-mail. Let it inspire you in the Now and in the future when you're looking for Mr. Right. Avoid being with the same kind of guy, because I'm sure Jefferson gave you mucho red flags...