What if your fourteen year old son weighed over 500 pounds?

Would you blame yourself? Would you enroll him into a weight loss program?

Or, would you ignore the problem and pray that he "grows out of it."

This is Alexander Draper. 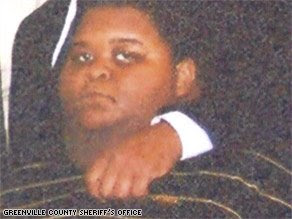 As of recently, he was put into foster care and his mother was arrested/charged for criminal neglect. Yes, many folks are beginning to fault parents for allowing their children to become obese, and calling it child abuse.
Alexander's mother, Jerri, claims she was too busy to make meals for Alexander and told officials he gets food from his friends at school -- not her.
Wow, this is a tough story to swallow. I know from experience that when an obese person wants food, they'll get it. No matter what. But, when the individual is a child it's harder not to blame the parent(s) since they are responsible for him or her...right?
And, let's be real --he didn't just wake up one morning and suddenly weigh 555 pounds. The kid got to that point over the years and his mother didn't do jack. She walked past him day after day and ignored what was going on. That in itself says she isn't the greatest parent in the world. If she was compassionate and caring, she would have done something to make sure her son lived a healthier lifestyle. Like --
1) Get off a few minutes early from work to take a walk with him. Maybe if they talked more, he wouldn't eat so much? We all know that the eating covers up an underlying issue, like low self esteem or depression.
2) Get him involved with a sports league where he can be active, meet kids, and have fun.
3) Buy healthy foods for the house 'cause ya know there probably weren't many veggies or fruits around.
4) Take him to a therapist.
Sigh.
By no means am I saying Jerri's a terrible mother. She's not. But, no one is perfect and we all have room for growth. There were sooo many things she could have done to avoid seeing Alexander get to this size. And yes, I do think it's a fair argument to compare drugs with food. If a parent gives their children drugs/alcohol, they go to jail. And, the same should go for giving them too many MacDonalds french fries because there are some parents who purposefully feed and feed and feed their children out of self hate, vengeance, etc.
There's just no excuse -- not that she's a single parent. Not that she isn't home enough (that's the problem, maybe?). Not that she's 'trying her best'...because clearly she's not. It doesn't take a rocket scientist to look at Alexander's eyes in the above picture and see that his body, heart, and soul is suffering. This lovely child obviously needs love and only finds comfort through food, like many peeps in this world.
Check out more here.
Posted by Lauren Hamilton at 3:34:00 PM