This is Alec Greven.

You may have seen him on television, or read his book.

It's called How to Talk to Girls.

That's right. You heard me. Keep an open mind. 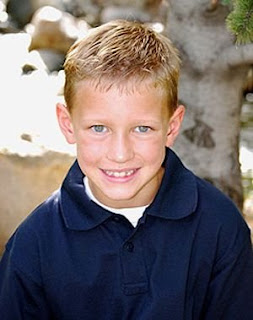 His journey started with a school project that his teachers loved so much they sold it at a book fair.
It quickly became a top seller.
And, before ya know it, Alec was on Ellen DeGeneres and, after his appearance, quickly got a book deal. Here are a few examples of what this young guy discusses in his book --

How to approach a girl
"I don't really believe in those start-up (lines). I think you should just walk up casually and just say hi, like any person would do. If she says hi back then you are off to a good start. Then you can ask her a question or something. If you are shy, try to go for a talkative girl, you don't have to say much and she will do the rest of the talking!"
Um...yeah...going up and saying "hi" to a woman and having her say it back doesn't always mean she's interested. Not that I know...
How to deal with a breakup
"I say life is hard, move on. That could seem a little mean, but really you have to get over it and then -- why don't you just try with another girl? Some people are like, 'I am a horrible failure' ... just move on to the next."

It ain't that easy, man or woman, to move on.
On pretty girls
"Some pretty girls -- all they care about is how they look and themselves. I think regular girls can be prettier than a pretty girl. Regular girls have other things on their minds."

Awww, how cute and true. I bet he ends up with some psycho supermodel.
Gotta say, I like this kid. He speaks from the heart and that's the most genuine place you can come from regardless of your age. Yeah, there are some things Alec says that speaks to his inexperience, but he always makes a good point. If a woman I was interested in came over and said "hi" I would totally dig that. So many of us have lost that sense of innocence. It should be simple, honest, and pure.
Alec is all of those things + more, which is why I think he's so successful. His words hit you at your core and make you wonder -- can I be 10 again?
Check out more on Alec here.
Posted by Lauren Hamilton at 11:16:00 PM