I like cabs. They've always been a great experience, especially when I traveled on my way back home from a long night of salsa dancing.

There's nothing like taking a ride in one on the way to the airport. Or, after you've broken up with someone. Or, when you're nostalgic.

The thinking time by yourself...just you and the road and the dirty seats as a complete stranger drives you. There's something romantic about it all. 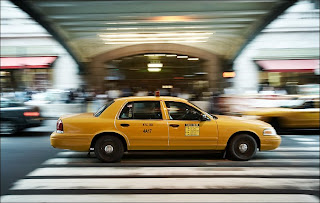 I've had many dreams, thoughts, and smiles in a taxi. I've also had a heavy heart in a few. Sure, most of the time I didn't say anything to the driver, but there's no need. You both understand what it is that you're a part of...a few quiet moments with maybe the soft sound of the radio.

It's an art form in a way. That's why I knew when I heard that cab driver, Joseph Cohen, drove off with a 5-year-old in the backseat, there was a misunderstanding.

Cabbies only drive off with the money in their pocket and worries in their heart.

Yes, he picked up a family at Logan International Airport, drove them to their home, helped them unload their luggage, and then proceeded to drive off with the sleeping girl.

He didn't know, I'm sure, because like me, she was quietly enjoying the ride amidst her slumber. Moments later, when he arrived at the airport, the police had already been notified and told him what happened. So, Joseph drove back and dropped her off of course, and the family tipped him $50.

I didn't know kids were worth that much these days.

The next afternoon, Joseph learned that he would be suspended for 3 days because he didn't check the van after the family left. Luckily, though, the police later told him he was only going to get a warning.

I guess cabbies are now responsible for the children of other adults? Yes, even the ones who somehow leave their kid in the backseat of a stranger's vehicle. Thank goodness they left her in good hands.