I love canaries. They're cute and sweet birds. When I worked at a pet store, these songbirds were always the ones I stopped to smile at before I walked out the door.

If I could have, I would have boxed 'em all up and taken 'em home as my next domestic pets.

But, that was all before I knew their huge ass secret -- 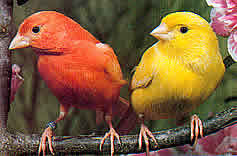 That's right, you heard me. These PTYs will poke your eyes out. And, apparently some peeps in Connecticut caught on to their semi aggressive nature, scheming to have them cage fight each other.


Is bird fighting that much of a money maker? And, out of all the birds why use canaries as oppossed to a vulture or hawk? I'm just sayin' if you're going to go into that business, at least do it crazy to the max. I wonder what the conversation was like when they came up with this idea:

Okay, it probably didn't go down exactly like this, but either way the verdict is the same -- not good. Who the heck would participate in such a terrible activity? Well, I guess that's easy to answer: someone who is really mean and clearly hurtin' on the inside. Good news:

Luckily, before any of these songbirds could start plucking at each other, the police in Connecticut arrested 19 people involved and seized over 100 canaries. Hmm, that's awesome, but I can't help but think to myself --

Michael Vick may have some competition. . .
Posted by Lauren Hamilton at 8:53:00 AM