I Should Be Blind.

Welp, American Idol announced this season's top 13 finalists. One of them being Scott MacIntyre, a charming blind guy. 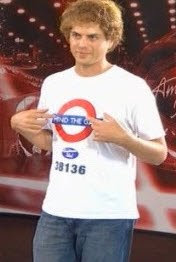 Sigh. It breaks my heart to say it. Okay, no, it actually doesn't. Straight up, he can sing as good as he can see. I can't help but ask myself, what's it all about, Alfie?

Was it out of pity, guilt, or not wanting to feel bad if he was kicked off that he's still on? You know the judges were like, "if we don't put this fool on the show, we'll get sh*t from America and our mothers."

To be honest, peeps, I can't say that I wouldn't do the same thing. I'm all about not going to bed feeling guilty. The fool can't see and he has the courage to come on American Idol, one of the most judgmental and scariest shows to be on (after True Beauty and The Bachelor). I'd look at Scott and give him the whole, "you're going to Hollywood" line and leave it to America to vote him off. I don't want the guilt when I go to the grave that I was the one who took a vision impaired man's dream away.

Maybe because we know, deep down, that he can see us. . . if we're willing to look.