Jon and Kate Plus 8 premiered yesterday, promising an inside look at the couple's rocky relationship. Verdict -- it's time to let go.

And, from the look in their eyes, they know it, too. 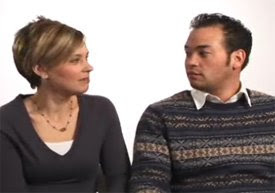 Jon and Kate's marriage has been weighed down by recent reports that they've been cheating on each other, although both have denied the rumors. For the first time, they addressed the media on their show, clearly full of resentment, anger, and hurt in the way they spoke about the other person.

I could even feel the tension between them through my television, which is thick as Hell.

They don't appear to be happy and seem to want out of the marriage. So, my question is, why aren't they divorced yet? Is it the show, the children, or their pride?

Let's be real -- clearly there is love here, but when you can't even get a husband and a wife to sit down together, something's not right. . . right?


It would be a different story if Jon and Kate were respectful of each other and remaining married for the children. I understand that there have to be sacrifices when kids or pets are involved. But, these peeps never show anything but selfishness and petty behavior.

I ain't in their shoes. Maybe they're madly in love and, like me with Diet Dr. Pepper, overdosed and used to their drama. Maybe it's an addiction now and they can't wait to attack the other person on national television to get their usual euphoric high.

"Very swiftly we turned into two different people and it's just hard."

Two people in two different places in life looking at each other like strangers. Who have changed and grown at a different pace. Sometimes it happens, but it doesn't make the hurt any less painful on your heart, right?

When you look at Jon and Kate, you can see the disappointment and longing for an alternate reality. Probably one in which they are still in love -- like it used to be. You can see that they both, regardless of how they are at this present moment, tried to save their marriage. It's easy to judge 'em, or to say, "she hates him," or, "they didn't try hard enough." But, let's get real, Anyone with 8 kids and a ten year marriage gave a huge effort at some point. Simply put -- now the effort ain't there anymore.

Sometimes you gotta be able to throw in da towel.

Check out this article here.