A South African teenage girl by the name of Caster Semenya just won the 800-meter gold medal Wednesday at the world championships.

What caught my attention about this story were the incessant attacks and questions regarding her gender. 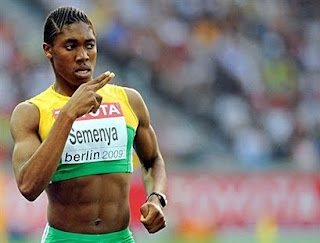 (Photo found here)
Her amazing figure, deep voice, and extreme domination = not meeting the requirements to compete as a woman.
Gotta say this is ridiculous, and I don't care if she turns out to have one or two balls. You're telling me because this woman doesn't fit into the small box of stereotypes we've assigned to women across the nation that she's not a freakin' lady?
Give. Me. A. Break. Seriously.
Would it have mattered if she came in last place? Would it have mattered if she had more traditional facial features and long hair? Would it have mattered if she didn't beat her competition senseless on the track, 'causing them to rethink their passion entirely.
'cause no lie, if I raced this woman and got an ass whoopin' like the one she gave a few days ago, I'd be running back to whatever uterus I came from. I'd say, "screw it, I'll go into competitive fishing. Got a better chance with that." I'd think, "who is her trainer and what's the number of her nutritionist? Clearly I need to work harder."
And, I'll be real with you, I'd also be thinking about steroids since the girl has a six pack in her face. But, by no means would I ever question her gender (well, maybe). It's not a nice thing to do, nor is it fair. She's only a teenager. And, don't think this isn't breaking her heart. Don't think she isn't weeping into her pillow late at night when no one is around...or so she thinks.
Why do we judge people? When are we going to let peeps be who they are without criticism or hurtful intentions?
Aight, so then you'd say: Lauren, but is it a fair competition for women to run with Caster? Hmm, I'd say the answer is no.
Okay, so then you'd also say -- "she could not know she's a man. She could not have a penis or a vagina. So, she may not know herself. What if she's both a man and a woman? Where will she compete? Will she be allowed to compete because she has a genetic disorder?"
And then I'd pause and think, "okay, maybe she's a man...and maybe it's not so fair."
Posted by Lauren Hamilton at 5:18:00 PM