Kelly Clarkson - Not Lookin' Herself?

First off -- I'm a huge fan of Kelly Clarkson. She represents for the curvy ladies and seems like a nice woman. I also like the fact that she's honest about her weight struggles and doesn't allow this to take away from her confidence as a beautiful woman. She's real, which is oh-so-hot in my eyes.

That, peeps, is hard to find. I won't call out any names, like Lindsay Lohan or Paris Hilton.

And, just as Kelly likes to keep it real, so do I. No one can deny that she looks different on the September cover of Self Magazine then she does right now, in reality. Take a look -- 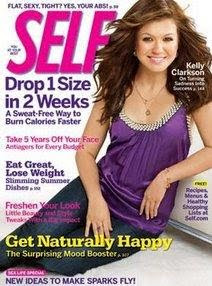 Okay...
So, there's a weight discrepancy. We all can see it and, for me, I don't give a shiznit about the lbs. What made me feel disappointed was that she didn't represent like she always has as a confident and sometimes curvy woman.
Yeah, some of you will say, "Lauren, she had no choice. They Photoshopped it without her approval and she's totally a victim."
I was born at night but not last night. You and I both know Kelly could have told those folks to make the cover look more accurate. It's just like Janet Jackson losing a ton of weight and then never really telling the world how hard she works -- like, has to go to da gym everyday and not eat anything super delicious type of work. No lie. And, this is a truth that applies to many women, like your next door neighbor or your mother.
For me, it's about being consistently honest not only with yourself, but with others. Particularly when millions of peeps look up to you as well. I feel like it's part of the j-o-b to stay true to yourself because, when you don't, so many individuals become affected by it. Flat out, Kelly is a gorgeous woman, no matter what size she is. So, when I see her on magazine covers that don't speak the truth that millions of women face, it hurts a little bit 'cause I know mucho girls will look at that and think, "Maybe I should lose weight, too."
What do you think?
Posted by Lauren Hamilton at 8:25:00 AM