I love trousers. They're cute and comfortable. A little sexy, but not inappropriate sexy if you wear 'em right. And, even if they're baggy, you're still rockin' a semi professional look. 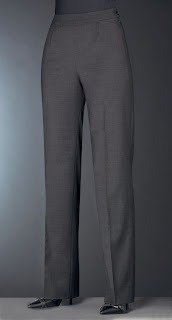 That's why I was shocked to hear about the story of a Sudanese journalist, Lubna-Ahmed al-Hussein, who was prosecuted for wearing pants at a restaurant. I bet many of you, like me, were thinking she got a citation or a minor ticket. Boy were we wrong --

Not eye lashes, folks. We're talkin' Denzel Washington Glory lashes. All for wearing a piece of clothing that isn't indecent, in my opinion. To make matters worse, 12 other women were charged as well. I don't know much about the Sudanese culture, but here's something that was informative from an article I read:

Sudanese law calls for 40 lashes for anyone "who commits an indecent act which violates public morality or wears indecent clothing." For women, indecent clothing includes the outfit Hussein wore when she was arrested and again during her first hearing on July 29: a loose-fitting top, headscarf and green slacks.

I don't want to disrespect another culture or country's laws, but this does seem harsh to me. How would you respond to this? As an American, it's easy for me to say I would fight it because that's what we're taught to do. But, I've never lived in a country where I would be whipped or beaten for wearing a certain piece of clothing. I've never experienced that type of fear in my life. So, I can truly say what I would do if I was this woman. Maybe I'd suck it up and endure the lashes or maybe I'd fight it like Lubna-Ahmed says she will --

Strength. I think that's what it comes down to no matter who you are or where you live. I have a feeling that she would fight any injustice if it were important enough to her.

We can all learn from Lubna-Ahmed al-Hussein. Seriously. Cross your fingers for her as she'll be judged at court Tuesday and plans to wear the same "indecent" outfit.

I gotta go lift some weights...