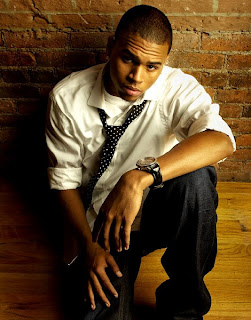 Uh-O. Looks like we have another wife beater on our hands, folks.
It breaks my heart that Chris Brown hits women. He looks so sweet. And, I was a huge fan up until this point...just like I was R. Kelly's.
Look. I know there are many of you folks who think you should separate personal from professional. I definitely understand that, but when a guy goes around hitting women or sleeping with underage kids, I have an issue with supporting their music. It ain't right.
And honestly what is Rihanna thinking? Does she like getting hit in the face? And don't give me that whole, she's-only-nineteen B.S. She's a woman who knows right from wrong. Plus, ya'll know this has probably been going on for a while. Maybe it's the drama. Maybe she gets off on it. Maybe she's scared to branch out and feels she can only trust a guy who smacks her in the face.
Yeah, I know, I'm being harsh. But, there's really no excuse to allow someone to use your face as a punching bag. I guess it proves money doesn't buy you happiness or hide who you really are. I have this feelin' that Rihanna may marry this fool one day or have his babies. But hey, maybe she won't. Perhaps she'll learn from this and never let another man abuse her again in any way.
Being with someone who doesn't treat you right.
This is a huge issue and one that never goes away, particularly with young peeps. I get it, how you can get sucked in. I'm tempted everyday, like last night. I was at a bar and saw a gorgeous woman on the dance floor. But, I could tell she was a drama queen (like Tatiana from this year's American Idol).
In 30 seconds I lived our relationship: I'd have to call her, initiate romantic outings, be emotionally giving while she withdraws, deal with her daddy issues, always focus on her. We'd fight 'cause I asked for her to be nicer. She'd create drama so she can pull away, thus sabotaging the relationship. I'd end it, she'd think I pushed her away and curse at me, saying, "I hope you find someone who can make you happy since I apparently can't."
At some point, it gets easy to sum up people in a glance. Rihanna knew. She knew in the instant she met Chris Brown what kind of man he is. It's written in his eyes. She could feel it, I'm sure. But, she decided to take the plunge in the Ocean of Drama we've all experienced at one point in our life instead of walking away from it.
You live and you learn, right? Let's cross our fingers for them.
Posted by Lauren Hamilton at 11:18:00 AM