For All The Sandra B's In Da House.

It's true, Jesse James cheated on Sandra Bullock, the academy award winning actress, with a young woman who E-mailed him about being a tattoo model for his company. 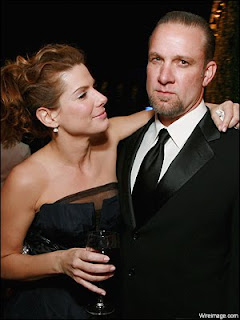 Is there really anything to say? It's disgusting and sad...and messy. I heard about this and I almost wanted to cry for her.

It wasn't like Tiger. When I found out about him, it was surprising and funny. More funny than anything else. The golf club. All of the gross woman he slept with. His bruised eye. The texts. I mean, heck, peeps debated all over the country about it, and got a good chuckle, too. I even bet some marriages were saved. "Hey, we don't have it as bad as Tiger and his wife...let's go to Paris instead of filing for a divorce."


But, what happened to Sandra isn't humorous in any way. Why? Because she's a nice woman who never let go, emotionally, to anyone until she met Jesse. She's never been in a huge scandal or hit someone in the face. Her track record is flawless. Sigh. Can you imagine what kind of damage this is going to have on her heart...her self-esteem...her Soul?


I'm angry. I feel like a protective younger sister, which is way strange for me since I don't even know this woman, but still...I feel for her. She was so genuinely happy with him. Anyone could see this, even from her most recent interviews after the Oscars with Oprah and Barbara Walters. Recently, with Ms.Walters, Sandra said a few words about being with Jesse:


"I finally feel like I have a home to come to."


Yup, a home that a tornado just rolled through and tore into pieces. And, it wasn't like she saw this thang coming. The sky went from bright ass blue to dark grey in a split second, and bam! It dropped from the sky, sucking up Sandra's heart and her Oscar high.


What can you say other than nothing? As her friend, what do you do except hold her and be compassionate?

How do we pick up the pieces after such hurt and heartache and start over again without carrying that into another relationship?

I don't have the answer because I really don't know and I'm trying to figure that out as well. But, I do think it depends on the individual. My hope is that, after healing from this, Sandra will open up to love again and attract a man who will have enough respect not to do this. I understand that she followed her heart and didn't disqualify Jesse from the man pool for having a different lifestyle. It was an inspiration to me that she was so open-minded, loving, and non judgemental. But, it's time to move on to bigger and better men in the future. Ya know, like ones who won't cheat for almost a year while their wife is making money for the family and trying to help you gain custody of your child.


Life's all about livin' and learnin' -- sometimes one heartbreak at a time.