Chronicles Of A 20-Something, Staying Positive.

Joel Osteen is a pastor at Lakewood Church in Houston and book author. In my eyes, he's also 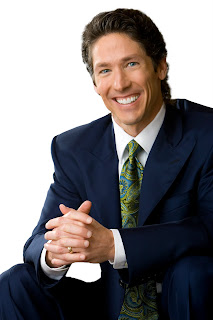 
To be real, Mr. Osteen is bringing out my bright Spirit, which hasn't been so visible these days. His book, It's Your Time, touches my heart and makes me realize how we sometimes hold ourselves back.

There are a lot of negative things happening in the world. The economy. The war. Health Care. But, it's our choice to either wallow in the destructiveness or take it as a way to reinvent who we have always been.

Steve Jobs didn't give up. Even when Apple board members voted him out of the company he created at the age of twenty, Mr. Jobs continued to shine by creating a few more companies. And, after realizing that they made a mistake, the board members asked him to rejoin Apple. Look where he is today.

Think about Thomas Edison. He tried hundreds and hundreds of times to create the light bulb only to fail. If he had told himself, "Well, this clearly isn't going to work. I might as well give up," the world would never have been able to use his invention -- the light bulb.

Or, Mary Bethune who grew up poor in South Carolina as a child. She had a dream to teach children in Africa but was rejected, despite her amazing reputation, from an African missionary. Did she give up on her dream to teach? No. She decided to open up a school for girls and boys in her home state. For the first few years they used cardboard for desks and had no books. It later became the Bethune-Cookman School, going from six kids to a large institute. She later became the first black woman to be President of a college and the first African-American woman to serve as a presidential advisor under Franklin Roosevelt.

These people, among others, didn't give up. They were at their lowest and, instead of giving into depression or self-pity, they adapted and went after their dreams. If every single person believed in themselves and their ideas like they did, we'd be better off.


Joel talks about how we all have the right components within us to reach amazing heights. But, that we have to try and reach before we can hold our dreams. That job you want ain't going to knock on your door. We have to try our best by applying to jobs every day and networking with others. It's the same with getting into shape. We have to have the motivation to walk to the gym and get on that treadmill. And, once we do, it'll be easier the next time and the next time. That's what growing stronger and more confident feels like.

I definitely know what it feels like to attend a self-pity party, but that's ova. Now is the time to look within and go for it. Sure, I've been kicked down a few times in the past year, but I'm still here. You're still here. When I read Joel's words, I believed that all I have been through has happened for a reason. Not having as much dinero as I'd like. Being unhappy with my career. Struggling to get interviews. All of these things happened for a reason.

In my opinion, when you're at the bottom, spiritually and emotionally, two things can happen: you look within yourself in a positive way or in a negative way. Take that lay-off as a blessing. Maybe it will lead to you discovering a new talent or skill that will change your life. Like that woman who didn't become an opera singer as a young girl because her parents said she wasn't good enough. It wasn't until the age of 90 that she finally became an opera singer, but she did it. People came from all over the world to watch her sing.

It's never too late.

So, let's make a deal, you and me. Let's live for today and reach for our dreams. They are there waiting on us to snatch 'em up...if only we knew it's our time.